We are actively looking for new players and GM’s to play, meet, and socialize. Its about getting back into and more people gaming. 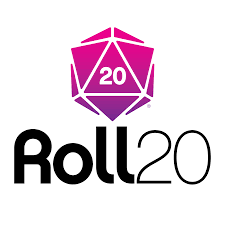 Welcome to the Nottingham Board and Wargames Club Roleplay Gaming Nights; These were running as Wednesday Night Roleplay gaming sessions however with the covid-19 outbreak we have shifted to an online service RollD20. So DM’s, GM’s and players alike we’ve missed you all. This will be the Nottingham Board and Wargames Club – Drinks and Dice Nottingham active games which we are pushing,  through our Games master in Residence ‘Jack’.

We are hoping to deliver one of these at least each calendar month,

Drinks and Dice Nottingham FB Group is a great place where you will find a mix of games and game masters. All the games on the night will be potential short adventures to help new players to get in to Role playing (See below) and facilitate new games of various one shots, the details of the games on offer for this session will continue to be included below in future updates.

The RPG and the Tuesday Night tabletop Games Night is often a good place to meet up with players and gamemasters and to set up a new regular game and we try to facilitate this were we can.

A role-playing game (sometimes spelled roleplaying game;[1][2] abbreviated RPG) is a game in which players assume the roles of characters in a fictional setting. Players take responsibility for acting out these roles within a narrative, either through literal acting, or through a process of structured decision-making regarding character development.[3] Actions taken within many games succeed or fail according to a formal system of rules and guidelines.[4]

There are several forms of role-playing games. The original form, sometimes called the tabletop role-playing game (TRPG), is conducted through discussion, whereas in live action role-playing (LARP), players physically perform their characters’ actions.[5] In both of these forms, an arranger called a game master (GM) usually decides on the rules and setting to be used, while acting as the referee; each of the other players takes on the role of a single character.[6]

This type of game is well-established, so some RPG-related game forms, such as trading/collectible card games (CCGs) and wargames, may not be included under the definition. Some amount of role-playing activity may be present in such games, but it is not the primary focus.[9] The term role-playing game is also sometimes used to describe games involving roleplay simulation and exercises used in teaching, training, and academic research

Our Organiser Jack; Play testing a RPG game by its designer. 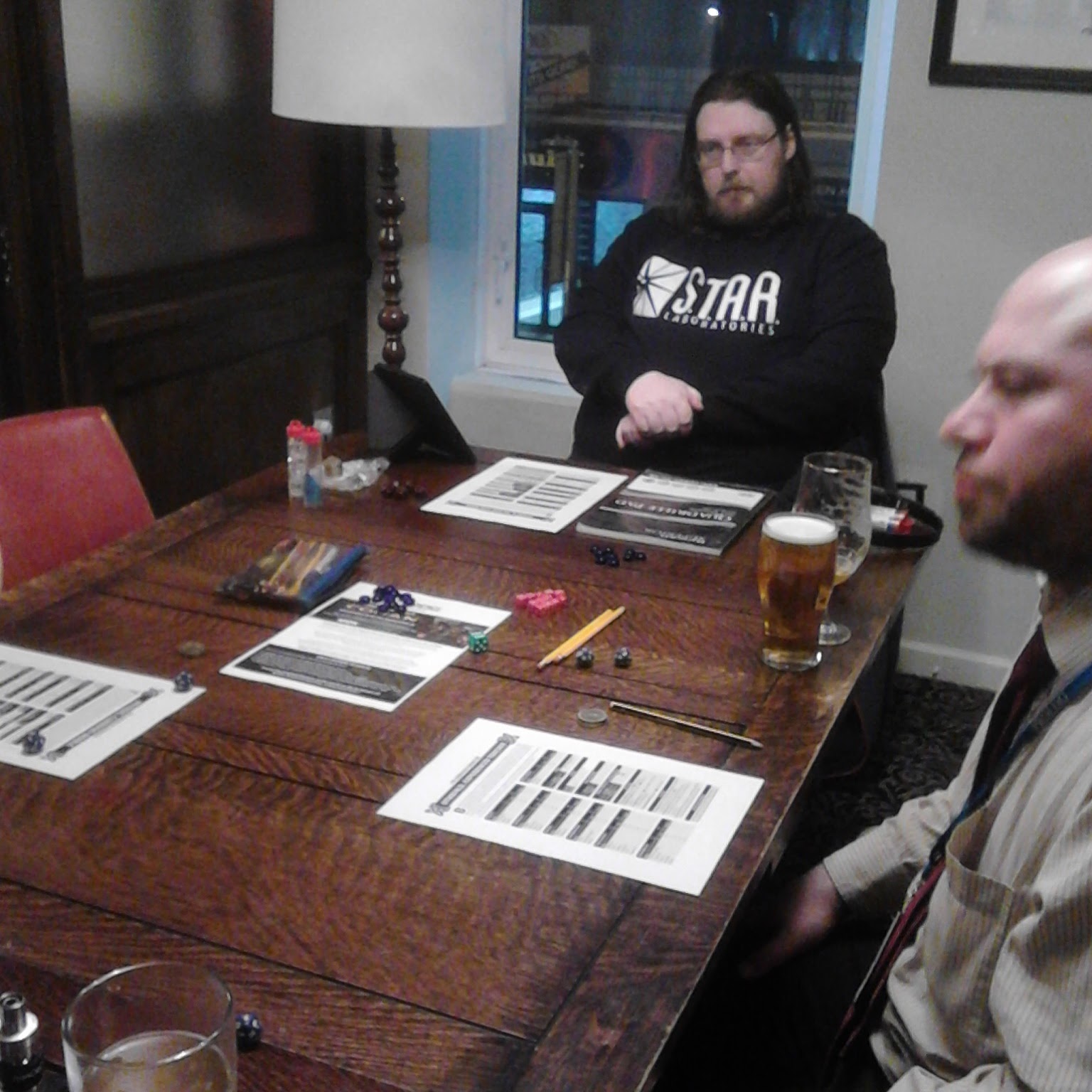 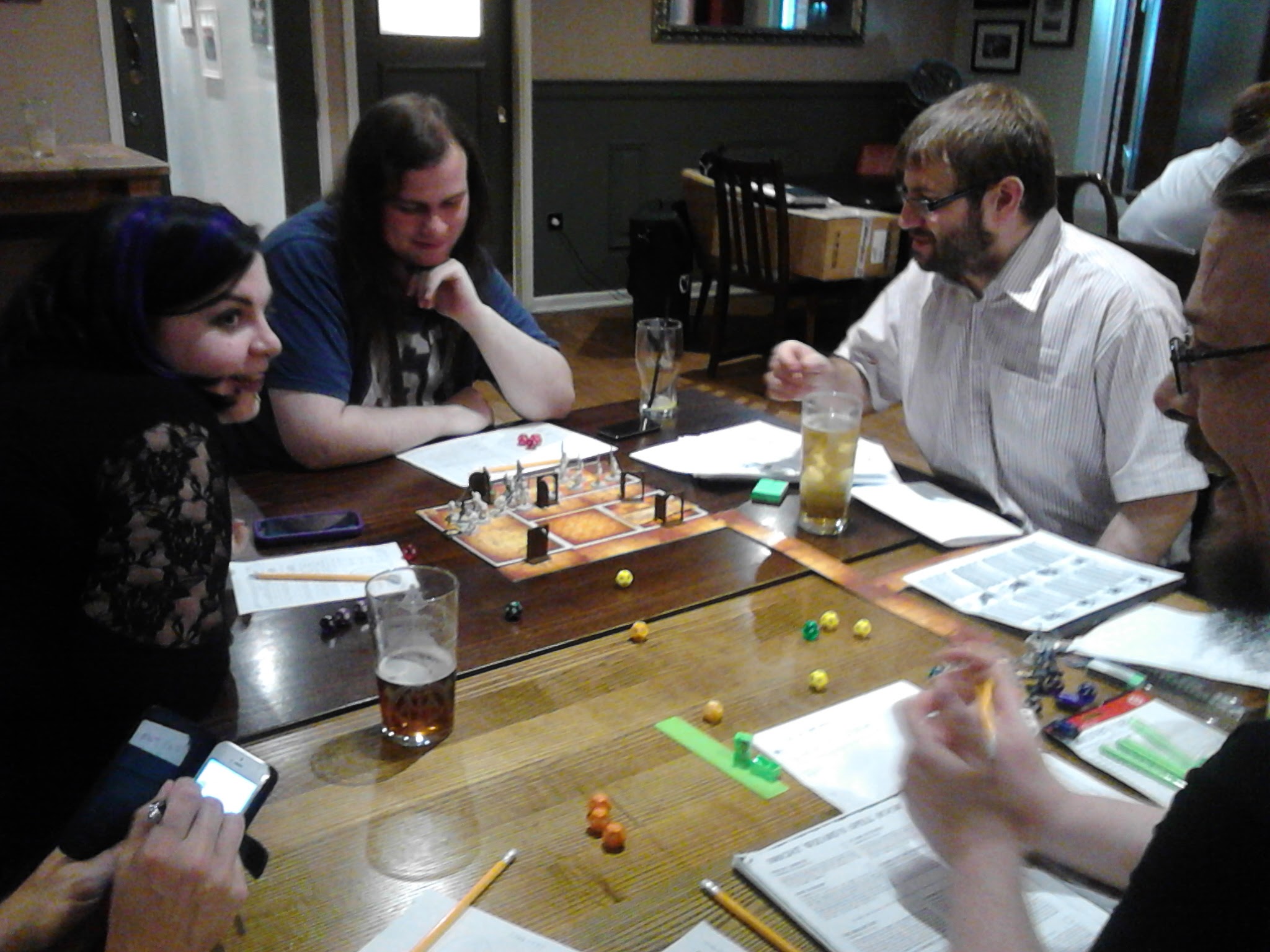 So what we offer and things we hae done

You can find all sorts of games in our tables, ranging from the classics like Dungeons and Dragons and Paranoia or Warhamer Fantasy Roleplay V1, to more recent publications, such as Starfinder; Star Trek Adventures; Pathfinder; or new age indie games including from local talents and writers.

With space to offer at least half a dozen games at our premises and gaming venues; and numerous games online to choose from, you’ll always find something to suit your gaming needs.

We have also held RPG prototyping and playtesting for some of the major industry RPG Publishers and their core developers.