So Mantic has finally announced its new project with James Hewitt of Needy Cat Games and Partners Dark Horse Comics, which will see the The Hellboy Universe is Coming to the Board Game Scene after a licensing partnership deal.

“Dark Horse is excited to work with Mantic Games on a game set in Mike Mignola’s inspirational Hellboy comic book universe.,” said Dark Horse Comics’ Chief Business Development Officer Nick McWhorter. “Mantic is not only a leader in the Miniatures Board Game category, but also have a thorough understanding of Hellboy and the BPRD storylines and how to integrate them into a game. We’re confident they can deliver a board game that fans of Hellboy and miniatures games alike can appreciate!”

The game is set to make its Kickstarter debut in April 2018; The Hellboy board game will be a cooperative play experience where players face off against some of the comic’s most iconic foes, and feature stunning, pre-assembled plastic (Same as with Walking Dead) miniatures that accurately capture the style and feel of Mike Mignola’s comic series. And allow up to four people take control of iconic BRPD members, such as Hellboy, Abe Sapien and Roger the Homunculus, before exploring gothic locations and uncovering ancient artefacts. However with it being Kickstarter the Characters of the Comics  Abraham Sapien, Elizabeth Sherman, Roger, Trevor Bruttenholm, Thomas Manning, and Kate Corrigan will no doubt be available with each stretch goals along with all the various monsters and boards to make this an interesting and fun game. 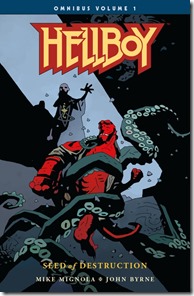 “Hellboy has a great cast of characters, diverse locations and legendary monsters from the pages of folklore and myth,” said Ronnie Renton, Mantic CEO. “The comics provide a fantastic foundation on which to build an immersive, fun and fast-paced co-operative board game that will let players experience some of their favourite moments from the series.”Interesting in the recent output from both mantic and Dark Horse was the ‘The Hellboy board game will be a cooperative play experience where players face off against some of the comic’s most iconic foes.’ That statement and Mantic recent success with both the Walking Dead and Star Saga, would suggest that this game could be something of a hybrid maybe taking the best aspects of the games and bringing a more board game dungeon- esq crawler to the market while engaging in the search and investigation aspects of the Stories.

A well-meaning half-demon whose true name is Anung Un Rama (Translation: “and upon his brow is set a crown of flame”), Hellboy was summoned from Hell to Earth as a baby on October 5th by Nazi occultists. He was discovered by the Allied Forces; amongst them, Professor Trevor Bruttenholm, who formed the United States Bureau for Paranormal Research and Defence (B.P.R.D.). In time, Hellboy grew to be a large, red-skinned adult with a tail, horns which he cuts off, leaving behind circular stumps on his forehead, cloven hooves for feet, and an oversized right hand made of stone “Right Hand of Doom”. He has been described as smelling of dry-roasted peanuts. Although gruff, he shows none of the malevolence thought to be intrinsic to classical demons, and has an darlky comic and ironic sense of humour. This is said to be because of his upbringing under Professor Bruttenholm, who raised him as a normal boy. Hellboy works for the B.P.R.D, an international non-governmental agency, and for himself against dark forces including Nazis and witches, in a series of tales that have their roots in folklore, pulp magazines, vintage adventure, Lovecraftian horror and horror fiction. In earlier stories, he is identified as the “World’s Greatest Paranormal Investigator.”

It also makes for a good fit for both Dark Horse following Disney’s purchase of Lucasfilm, publisher Dark Horse Comics lost the Star Wars license after two decades, which was then given to Disney’s Marvel Entertainment, becoming one of the publisher’s most successful franchises. So no doubt they are looking to expand their existing lines with new revenue and tie a board game in with the new film release, ‘Neil Marshall’s forthcoming Hellboy film is currently in pre-production, starring David Harbour, Sasha Lane, Ian McShane, Penelope Mitchell, and Milla Jovovich.’ While in the last nine years since its inception, Mantic Games has released several complete tabletop gaming systems including Kings of War®, DeadZone®, Mars Attacks® and DreadBall™. The Mantic team’s obsession for making detailed miniatures, simple yet challenging games has seen Mantic become a global presence in the tabletop gaming arena. Mantic Games has developed very strong relationship with its community, and crowd funding has raised extra development money for recent product launches, which in turn has developed bigger ranges in plastics for the retail launch. And to date, backers have pledged over $5m to fund new projects come to life, making Mantic one of Europe’s most funded companies on Kickstarter. Mantic has sales offices in the USA and UK, supplies 20 countries, has a complete design studio team, a global supply chain with production facilities based in Nottingham, England.