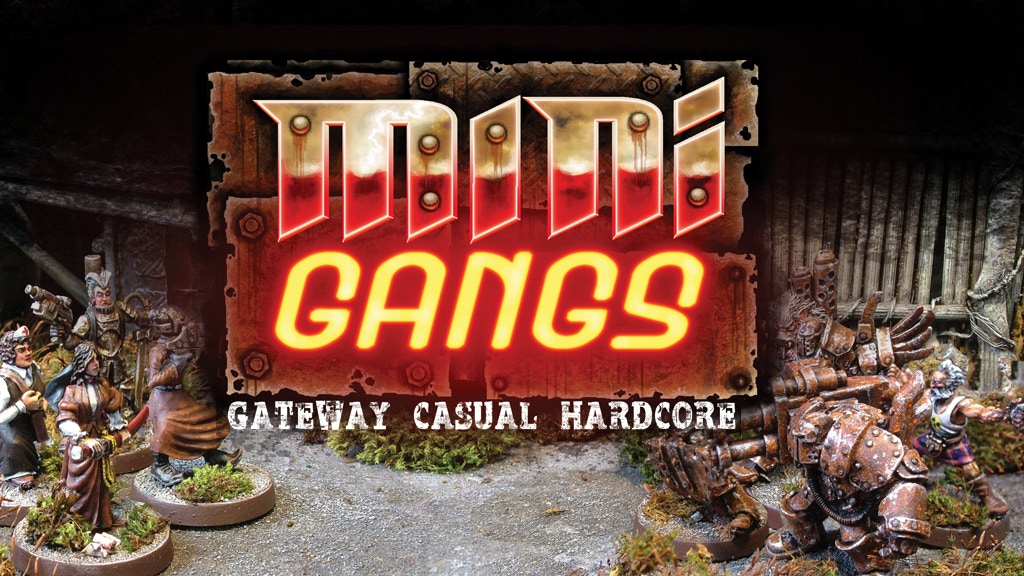 The on-going entrepreneurial push that is Ramshackle Games has again brought a new system and game to Kickstarter with his latest offering ‘Mini Gangs’  a new rule set which combines ease of play with great strategic options resulting in a quick game with a lot of hidden depth. Its an ideal option for short club games, for playing a campaign and for getting beginners into tabletop battle games. a compact 12 figure, A5 Rule Book and tokens game designed around the principle of ease of play and three levels of complexity.

In Mini Gangs players control a gang of four model characters each fulfilling a different generic battlefield role. Each has its own unique style. Any of the gangs can be taken as rewards for backing this project and all are supplied in the full set reward.

For those that follow this Blog, one touched upon this project from Curtis a while ago, https://whispersfromtheleadbelt.blogspot.co.uk/2017/06/mini-games-new-venture-from-ramshackle.html and managed to get a couple of playtest games in.

WHAT IS MINI GANGS? 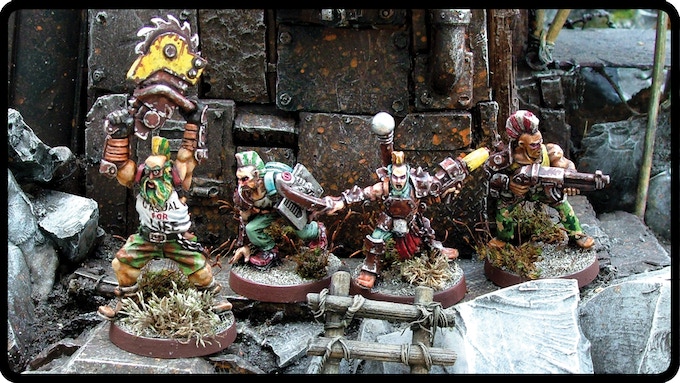 well at its core Mini Gangs is a whole new rule set from Ramshackle Games, a departure from Nuclear Renaissance with its more complex rule sets in a preference of a game that offers combined ease of play with great strategic options resulting in a quick game, however, one that provides the players with a lot of depth.
Mini Gangs can be played in three different ways, each appealing to a different level of gamer.

Gateway– A simple and easy game for beginners. Mini Gangs Gateway is designed to teach beginners how to play tabletop strategy games. It great for children of 6 years or older as the simple rules mean it’s easy to understand. It is also good for adults who have never played model based games before. It teaches all the core concepts that are used in more complex games. 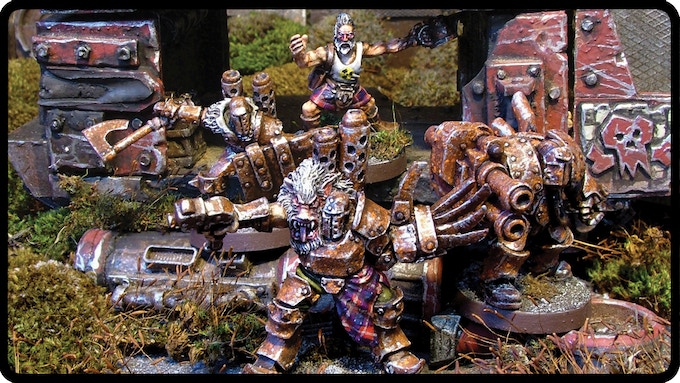 Casual– A game for easy play and deep strategy. Mini Gangs Casual adds a deck of cards. These cards represent equipment, weapons and skills for your gang. This adds a layer of depth to the basic rules which makes it ideal for quick games. Whilst being simple, Casual makes for rewarding play. Mini Gangs Casual is great for club or gaming groups as it is a fast-paced multiplayer game.

Hardcore– A sophisticated in-depth gaming experience. Mini Gangs Hard-core features a full points system, campaign rules and scenarios. It expands the game to be a tool for playing any skirmish level encounters with the minimum of inconvenience.

DESIGNER’S NOTE – ‘a quote from Curtis’

“I first came up with the idea for Mini Gangs when I was trying to make a simple war game. I realised that by using one stat for each character I could make a game that was easy to memorise. The idea is that to shoot, players must roll over this number and to make a combat attack they must roll over the number. By balancing those numbers I could give a good spread of probabilities.

With four character classes, I could represent ranged troops, combat troops and troops that were ok at both. I then added in the actions, which limit what the classes can do. For example, a healer with an Awesomeness of 2 is very bad at fighting, but would be a marksman level with a gun! Therefore the healer cannot make a shoot action. These three basic rules of under/over, actions and restrictions mean that the different battlefield roles are represented really well with minimal paperwork.
At this point, Mini Gangs Gateway was born! It’s great for gaming with kids, or players new to tabletop gaming. I find at our local club it can be intimidating for new players to try to get into figure based tabletop battle games. Mini Gangs offers this way in, by using (and teaching) all the core concepts from our favourite strategy games.
However, Gateway doesn’t go far enough for more experienced players. I wrote out a list of additional skills and things I wanted to add to the game. In playtesting, we found that having these on cards gave us a really fun experience. Players in Casual get randomly dealt cards, which they then give out to their gang. Choosing who these go to and then using them during play builds a really deep strategic element into the game. This random setup for gangs also makes for a very speedy game turn around. After a few goes, we were finishing four player games in about forty-five minutes or less!
Once we had the cards working, I assigned points to them and the characters, meaning that players could build their own forces as they wanted. This is Mini Gangs Hard-core, and can be used to put on any kind of game you like.”


HOW THE GAME PLAYS

Players select four models. These are placed on the gaming table with pre-arranged terrain on it. The table can be any size however a 2ft by 2ft table works well for 2 and unto 4 players.

Players then take turns with their gangs, each character in the gang may make one action per turn. The actions are move, shoot, fight, charge and heal. The movement rules are straightforward with models moving 10cm.

Shooting, fighting and healing require a dice roll, basically, an Action Resolution test to determine if they are successful or not by rolling under their Awesome  Stat. Conversely, they must roll over their Awesomeness Stat in order shoot or perform heal actions. Charging is a move and fight action rolled into one. However, some characters can perform actions others cannot. I.e. the healer is the only one who can make a Heal action. Characters each have one statistic, called their Awesomeness.

Again this is a real departure from Nuclear Renaissance and many other Tabletop games which aim to provide stats for every possible action, Mini Gangs instead simplifies the statistics the whole system down to its bare bones.

What does this mean, well it makes Mini Gangs easy to play, easy to teach and surprisingly (Not in a bad or negative surprise way) great fun. This is the basic game basic game, and one that young kids and newcomers to wargaming Gateway. Casual and Hard-core use this same game engine but incorporate gang design rules, armour saves and much more. Interestingly the simple mechanics do not detract from the richness and depth of the game.


SO WHAT DO YOU GET AND WHAT ARE THE PLEDGE OPTION

This is another big shift from the usual resin that Ramshackle normally uses (polyester resin), instead, this is a new high-quality polyurethane resin and while a common resin for model manufacture, it marks an interesting shift. The older style is good, however, what this means for figure production is a rigid, lightweight crisp clean and strong cast. Most Ramshackle Games models are cast Polyester and while this is great for mass production it does have limits in areas like proportional strength which means it cannot be used to produce more dynamic figure poses due to the thinner components like a sword or an arm. It also allows Curtis to sculpt much more detail into figures and for the master sculpt to carry the detail across with the model.

Like many companies these days Ramshackle is offering a sampler of their rules with a free digital download of the Casual variant which can be found below.

SO WHAT DOES THIS MEAN

So what does this mean, well this will be  Ramshackle Games’ eighth Kickstarter campaign. and all the previous ones have been highly successful, with feedback being positive. It should come as no surprise that this one is looking to go the same way.

The projections on Kicktraq seem to provoke interesting speculation, with the current charts showing.

and projections at time of post are at Current Pledge Levels £1,680 putting the project at 84% of the Goal, however the trend (and it is a trend, not a projection!) Trending towards £29,400 or 1470% of goal, and while I’m sure they will succeed in passing the goals and entering the stretch goal range time will tell.

The gameplay is simple yet fun, and this really is an Intro or entry-level game where it truly emphasises that point. The rules combine a level of clever tactical play and high simplicity that anyone from small children to those new to gaming can pick this game up and start playing from a quick read of the rules. It is the sort of game that those who game are looking for to encourage their own kids into miniature gaming, Games clubs who are looking for either an Intro game or a nice little skirmish game for between games or something a little more lighter.

However is it for those who game, well from just the gameplay one would say yes, its light refreshing and encourages tactical play regardless of experience it makes you think, the models are exquisite and highly detailed. The use of the new resin is great and something one hopes Ramshackle Games will continue to push with their figures. The new dynamic range of poses and looks are amazing and bring that spark back to the table and something that we will be looking to back, as are many others.