Shoot, ram, skid, and loot your way through the ruins of civilization with Gaslands: and Gaslands Refuelled, the tabletop miniature wargame of post-apocalyptic vehicular mayhem.

Bring or borrow cars as we warm up with standard Death Races ahead of the possible organised play events. We’ll be aiming to try out some of the other missions from the rulebook during this session!

So with our new Club house and gaming space you can get to look at two of our options here So we either run dedicated ‘Join us for an evening or session of Gaslands!, or you can look at running a game of Gaslands amongst your selves and we have terrain for it.

It doesn’t matter whether you’ve played before, or are just interested in trying out Osprey Wargames fantastic Car Wars Game

We’ll also be running a games where new players and newbies can go with the ‘Learn to Play’ session as part of our event so those interested should pop down or ask about it.

We ave an idea that as we progress Players will create their own team of two cars and turn up to take part in a series of games. Cars may be either 1/64th or 1/43rd scale (diecast or resin conversions – The sort of crap you get in toy stores and £1`stores) and there will be comments made on or for the best design.

Whether you are a fan of the Classic version or the Refulled version with all new material including expanded and enhanced perks, sponsors, vehicle types, and weapons.

The expanded Gaslands: Refuelled contains everything a budding wasteland warrior needs to build and customize their fleet of vehicles in this harsh post-apocalyptic future. Featuring a host of options for scenarios, environmental effects, and campaigns, allowing players to create their anarchic future.

An opportunity to share the hobby, hang out with gamers from different areas and have fun. 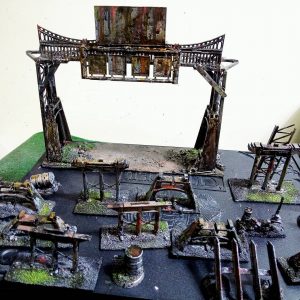 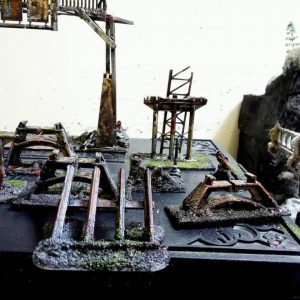 Terrain Building and built on the Thursday Night Hobby Hangout.

The original Gaslands used an X-Wing-style manoeuvre templates system to move vehicles around the environment, with players shifting up and down gears to adjust their speed and turn order.
Skid dice inject an added element of risk taking, of wiping out while turning, and cars could shoot at or ram into each other to wreck opponents.

The game uses Matchbox ™ Style  Cars converted and painted to add a sense of style and realism to the game but are not essential. If you are interested in Conversions and painting such models check out the Hobby Hang Out – Thursday Night Hobby Night Page.

The games played very quickly even with many new players to the game and the club. The new players vehicles were fantastically assembled and fun! Thanks to the players for the loan of the plastic tokens and markers for the game. (Guessing club will be getting some to help with future gaming.) I think they worked well and were very popular with other players to be fair.

The games ended well within the time we had set aside and were brilliant for little one-off sessions, but it also led to chats about being played as a season, with your team of cars returning for revenge matches emblazoned with sponsor logos. This could be a much bigger thing and what with your chosen sponsor tailoring how you play, it could lead to some very interesting and fun games.

I think the best aspect of the game its self and what we played was though, that it encouraged all the players to go out and buy toy cars, and just model make with them, have fun and enjoy our selves.

The whole session was a blast and thanks to the A1 Route Crew and everyone who turned up and played and also thanks to @HobbySpotz for the use of the space for our gaming event there.

May the 4th Be With You,

Star Wars Legion Gaming Night While the games club may enjoy board games, we are also active tabletop miniature gamers and solid Star Wars Fans, and so while the Original trilogy might be burned into […]

Tuesday Night Gaming Tuesday Night Board and Social Game Night More give me warmth, good cheer, beer and board games, etc…. fed up with the weather and poor TV already … Well, this is the […]