So after this interesting little tibbit from last months Necromunda , 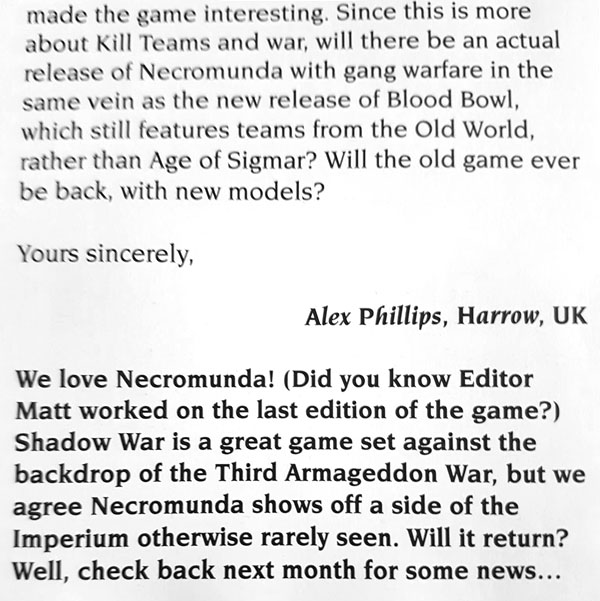 So exciting times for Games Workshop in the release of Necromunda; And even better not a re-release of the old system but a newer developed system designed around a sleeker WH40k.

If you’re new to Miniature Gaming you may not be familiar with Necromunda, except as tales of the Glory days, often reminisced on by gronards and Oldhammer gamers, well it was a favourite  with many in the gaming community as it was a way to take a gang of misfits and both progress theme through a game and develop their story as they fought or died in the dark underbelly of the Hive worlds. It allowed players to dive into the underworld of the Imperium, allowing players to control their own Hive Gang augmented with black market cybernetics, gene modifications and scavenged or stolen weaponry. And while WH40k places you in the macro scale of General of a vast army Necromunda goes the other way with a microscale approach of Gang leader, looking out for gang members.
According to sources at the Forge World Open Day, Andy Hoare believes, “They’re absolutely nailing it in terms of how to keep all the great stuff, yet adding to the new system and in order to bring in new things, like Hive Secondus, The Ash Wastes, new gangs.“ 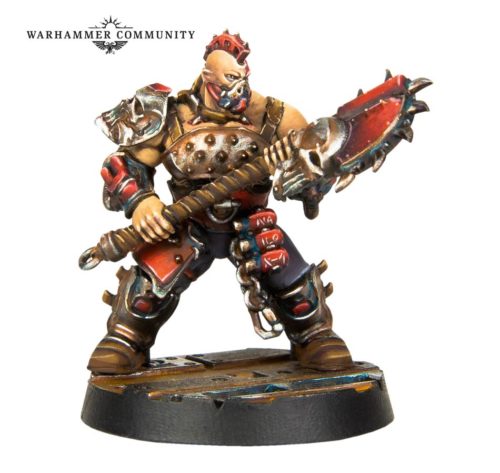 And,
“We’re broadly looking at a game based on the 8th Edition 40k mechanics, but tailored to a form of skirmish warfare. We’ll see the addition of Action Points, which will be used to active gang members (in a similar way to how Space Hulk works). Different actions will cost different points, for example activating a Heavy Class Ganger will cost 2 Action Points, however, a basic Juve Ganger will cost only one.
We’ll be looking at a release schedule very  much like BloodBlowl, this see a,
‘Preview’, launch of the initial box set. Like BloodBowl it will be a self-contained box with steady releases.
The box itself will contain the Escher and Goliath gangers which have been seen already, the rules, game accessories and terrain either similar to or most likely Shadow War terrain as the Specialist Games studio do not have the resources to produce terrain solely for Necromunda, so they are trail blazing the Shadow War release with all the cool terrain that was released with that boxed set.
(This does highlight the small nature of the specialist Games team and the explanation to the cries of why not release X,Y,Z sooner) and subsequently in individual kits until present. The rules will allow for play in the way players are used to on gangways, ramps and gantries, but also in tunnels making use of the Zone Mortalis tiles available from Forge World.
We will see all the gangs from Hive Primus (See Below) return, along with the gangs from Outlanders and Fanatic. We will also see new gangs and some expansion of the fluff on Necromunda.“ 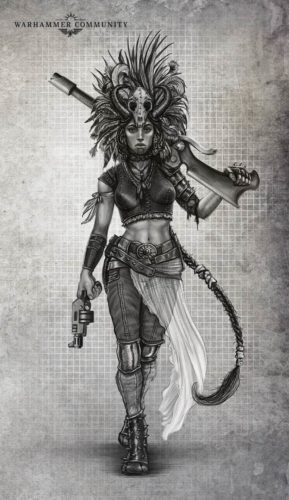 HIVE SECONDUS was written about in the Fanatic days, a Hive terrorised,  overrunning with an established Genstealer cult, subsequently nuked by the Necromunda Defence Forces to rid the planet of the infestation. However, the Hive topples on its side with most of the Cultists surviving. This results in the Defence Forces building a large trench system in the surrounding Ash Wastes to isolate the remains of the Hive from the rest of the planet.
Even better it was hinted “We will be visiting this intriguing story in the future!”
Keep your eyes on Warhammer Community for all the latest news and previews.
More Pics coming shortly.

Apologise for the tardy and lack of posts.

Well their has been a lack of posts and apologise for that, real life issues of commission painting, rule writing for Sky Relics, family and health seems to get in way, but hopefully these posts […]

Alan and Michael perry of Perry’s Miniatures are renown for their figure sculpting skills and exquisite miniatures in all scales from 15mm to the mighty 90mm, and while 28mm is preferred, it seems that figure […]