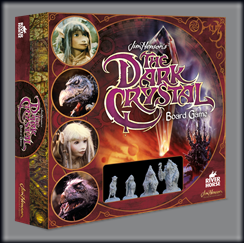 The dark genius that is Jim Henson has inspire River Horse games and Jim Henson the perfect Mix? Dark Crystal Board Game.d a multitude of comics, TV shows and stories, and recently it Inspired River Horse games and Alessio Cavatore to create the Labyrinth the Board game. Yet it seems this was just a prelude to something of a run on Henson’s range with a new game, this time based on the dark epic fantasy, The Dark Crystal.
.

• 4 highly collectable figurine renditions of the main characters: 2 Gelflings – Jen and Kira (with Fizzgig!). 2 Skeksis – skekSil the Chamberlain and skekUng the Garthim-Master

The Dark Crystal and its expansive fantasy setting is enjoying something of  a resurgence in popularity, with a newly released hardcover book The Dark Crystal:  The Ultimate Visual History releasing shortly, from publishers Insight Editions, a new 12 Issue comic series and, it has also seen Netflix announcing plans for a 10 Ep series inspired by the film. And the relationship between River Horse and The Henson Henson has already proven fruitful.  The company recently announced plans for a second expansion for its Jim Henson’s Labyrinth Boardgame, expanding the line with a new Goblin Range. 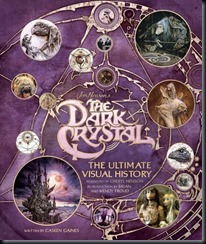 The game will see players following the events of the movie, ‘The Dark Crystal,’ and will see players given the opportunity to assist the film’s main characters, Jen and Kira, as they seek to heal the Dark Crystal by gathering the magical Shards.
The players move visually exquisitely sculpted figurines, around the board, visiting the iconic locations from the movie and exploring the Dark Crystal world. (From playing the Labyrinth Board game on hopes there will be a little more than this in the game, as it can prove a little mundane and samey in game play, Ed.)

The game is expecting to shift: Early 2018

So after this interesting little tibbit from last months Necromunda ,     So exciting times for Games Workshop in the release of Necromunda; And even better not a re-release of the old system but […]