If you have been in the Industry or merely just watching the tabletop gaming news will know that the once owner of Saxon Miniatures miniatures was looking to sell the business in order to expand the company range. The core concept they were looking at was to develop a merged take-over were the current owner and sculptor in order to allow them to expand the range of miniatures.

This is an interesting concept as the current range of figures are exquisite as the Saxon Warbands below show.

And for a while, it seemed that Saxon Miniatures was going to fall by the wayside like so many great companies however it Warlord Games has just come to the rescue… With an interesting news announcement.

Warlord Games is delighted to announce its acquisition of the Saxon Miniatures Dark Ages ranges from History Maker.

‘Paul Sawyer, Head of Product Design at Warlord Games, says “One of the cornerstones of the Warlord Games offer is our Hail Caesar game and the very first Warlord products were plastic Early Imperial Roman Legionaries (ten years ago!) so this period of military history is very dear to our hearts. The Dark Ages are a popular and exciting period for wargamers so when Saxon Miniatures 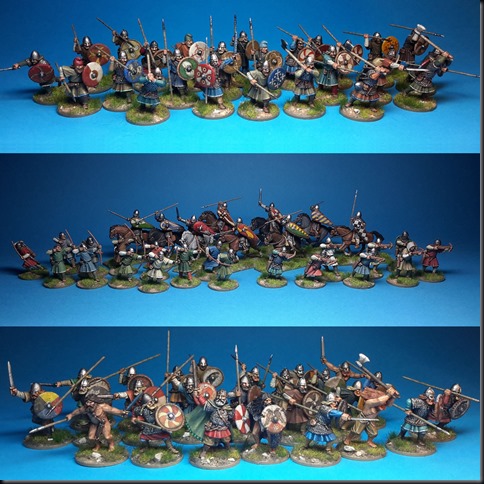 became available we jumped at the chance to add it to our Hail Caesar range. Renowned author, John Lambshead has already almost completed writing the first of three supplements covering this period and we hope this will be released during 2018. We are delighted that Colin has agreed to carry on sculpting for us and adding to this great range. We’ll be releasing these gorgeous figures as soon as we possibly can so keep an eye on our email newsletters and social media channels.” ‘
And to quote Colin Patten, the owner of History Maker, said: “I am really pleased to announce that Warlord Games are the new owners of the Saxon Miniatures Range. To be honest it will be a great relief to concentrate solely on the sculpting while a super-efficient machine handles all the rest, including the shows! Look out for a constant stream of new figures, warbands, and armies. Lastly, a huge thank you to all my customers – you will never know how much you were all appreciated“.

What this news from Warlord games sees is an expansion of their Arthurian –  British & Saxon lines, and adding newer aspects like El Cid, and a variety of Normans, Saxons and new an invigoration of Viking Warbands and with what looks like a restructuring of the company, sudden lack of vacancies, could mean that the company is about to expand its line and the company profile. This would tie in nicely with the Warlord Games anniversary of Bolt Action 2nd ed release and also intertwine with the upcoming launch of a new collection of Tank War sets, set to be released in the fall of 2017, a new license deal with the BBC on Dr Who and bringing Tim Bancroft onto the Warlord team to help develop the Gates of Antares development and communications and finishing with the upcoming Blood Red Skies.
So Exciting times ahead.

Super secret history of the Tau by Gav Thorpe.

A quick one today.  From ones usual wandering in the interweave one came across an interesting article by Gav Thorpe, and how the Tau a species by Gw for its 40k game came to be. […]

On Saturday the 15th of December Wargames Foundry are going to be hosting a Warhammer 40,000 Rogue Trader participation game.  The game is being run by Andy and Gareth, a pair of veteran gamers who […]

Ok a bit of light news for a change, with everything being so heavy and dark in the news its always nice to have something that raises a smile and the spirits. (Table an example […]